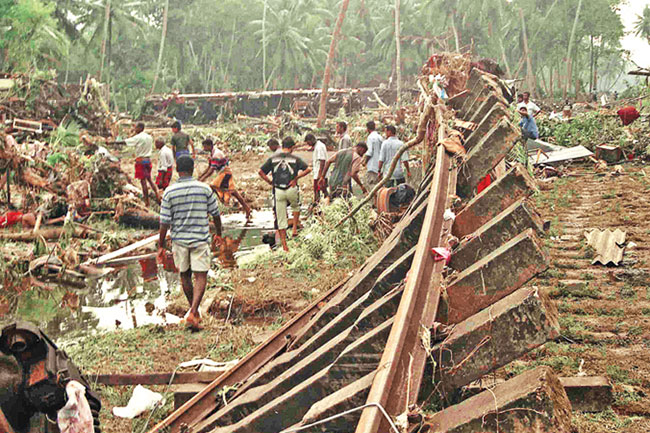 A two-minute silence will be observed island-wide in Sri Lanka at 9.25 am this morning (26) to commemorate the thousands of people who died in the 2004 Tsunami, the Disaster Management Center (DMC) says.

Today marks the 16th anniversary of the 2004 Boxing Day Tsunami, one of the world’s deadliest and most destructive natural disasters, struck over 10 countries in the Indian Ocean.

A powerful undersea megathrust earthquake, which registered a magnitude of 9.1, struck off the coast of Sumatra Island, Indonesia on a Sunday morning, 26th of December 2004.

About 20 minutes after the shock, Indonesia’s capital Banda Aceh, which was closest to the epicentre of the earthquake, was devastated by massive 100-foot waves, claiming the lives of more than 100,000.

A series of turbulent waves then ravaged the coasts of Indonesia, Sri Lanka, India, Thailand, Maldives, Myanmar and Andaman and Nicobar Islands.

In all, deaths from the disaster mounted over 230,000 in a matter of hours.

Sri Lanka was one of the hardest-hit countries with over 40,000 fatalities and property damage worth several million rupees. Thousands were left homeless as waves pushed debris several kilometres inland, pounding buildings into rubble.

Reportedly, the OIC had been traveling with another police officer when he had lost control of his vehicle and collided with the Anamaduwa