President instructs authorities to look humanely at grievances of prisoners

President instructs authorities to look humanely at grievances of prisoners 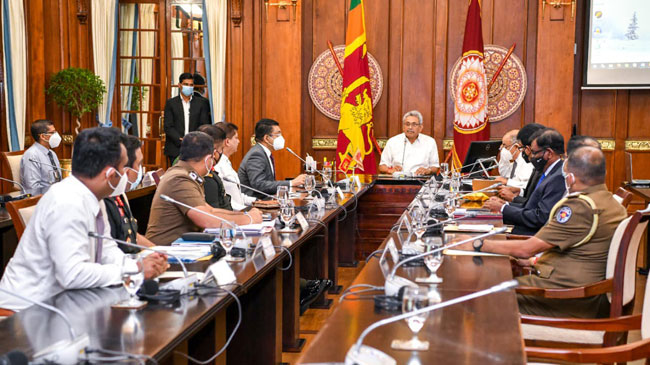 President Gotabaya Rajapaksa instructed relevant authorities to look humanely at grievances of the prisoners and address them immediately by providing necessary assistance to them.

More than 12,000 people are incarcerated due to drug addiction. The President emphasized the need to pay special attention to them and formulate a rehabilitation programme, the PMD said.

The President made these remarks at a discussion held at the Presidential Secretariat today (10) to look into shortcomings and issues in prisons and to recommend solutions.

President Rajapaksa instructed officials to explore the possibility of constructing pre-fabricated prisons in the so far identified locations in order to eliminate overcrowding in prisons.

The need to study the models of modern foreign prisons and take immediate measures to provide facilities was stressed by the President.

A large number of people are kept remand due to delays of the Govt Analyst, Attorney General and Police Departments.

The President also pointed out that the relevant agencies including Customs, Police, Prisons and Rehabilitation should establish a Presidential Task Force and take steps to resolve existing problems.

Minister of Justice M. U. M. Ali Sabry, State Minister of Prison Rehabilitation Lohan Ratwatte, Secretary to the President P. B. Jayasundera, Secretaries to relevant Ministries and Security heads were present during the discussion.