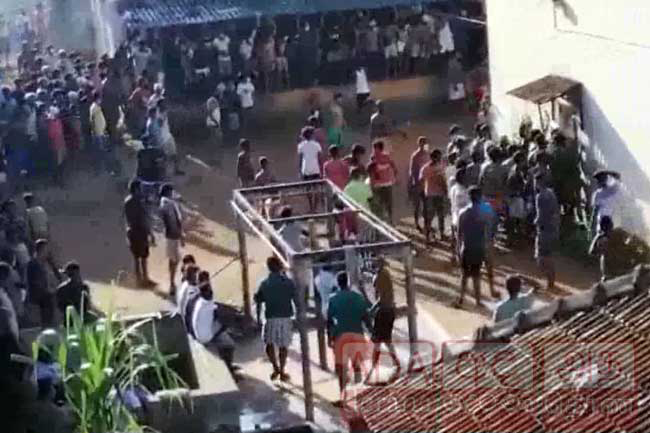 Bodies of two inmates who died in the recent unrest at Mahara Prison have been identified by their family members.

A total of 11 inmates had died in the incident while 106 others and 02 prison officials sustained injuries. It was also revealed that 08 of the deceased inmates had been positive for Covid-19.

In addition, Rapid Antigen Tests carried out on the hospitalized inmates confirmed that 38 of them are positive for the virus.

Unrest at the Mahara Prison broke out on Sunday evening (November 29) when a group of inmates attempted to escape the facility following a conflict with prison officials.

Subsequently, a massive fire had broken out at the prison after several inmates set fire to the health office, a storage area, and several other places within the prison.

The fire had raged on until 3.00 am on Monday (November 30) and was completely extinguished with help of 06 fire trucks.

Two prison officials were also held hostage by protesting inmates, however, they were later rescued by the authorities.

Authorities later revealed that the rioting inmates had also broken into the prison’s medical section and consumed the stored pharmaceuticals including the ones used to treat mental illnesses. According to them, this resulted in more violent conduct among the inmates.

June has turned out to be a phenomenal month for Bollywood at the box office as films like Kabir Singh, Article 15, Bharat emerged as blockbusters.