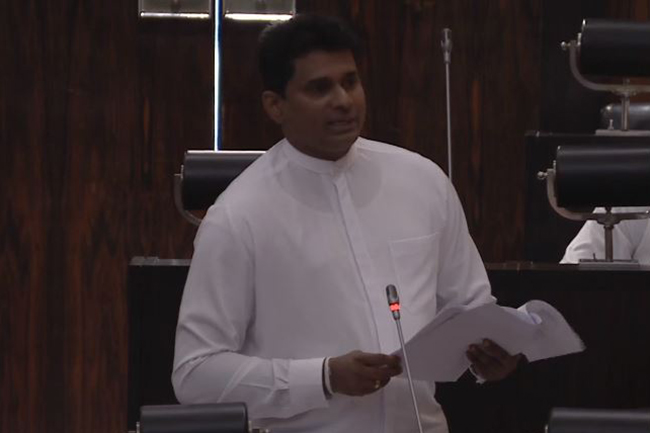 The public sector has not yet purchased any Rapid Antigen Test kit, which is used in the diagnosis of respiratory pathogens, says Pharmaceutical Production, Supply and Regulation State Minister Prof. Channa Jayasumana.

He made this remark during today’s parliamentary session, responding to the accusations on irregularities during the tendering process.

“We have been performing PCR tests for diagnosing novel coronavirus so far, however, the Rapid Antigen Test is not a substitute for PCR tests. This is a test developed for diagnosing a large number of people within a short period of time.”

Various parties had been stressing on the use of Rapid Antigen Tests for several months, but the WHO included it in its Emergency Use Listing (EUL) several weeks ago, authorizing two manufacturers – SD Biosensor, Inc and Abbot Rapid Diagnostics Jena GmbH – he said further.

Continuing, he said, the WHO has mentioned that the EUL listing can be leveraged by other international, regional and national procurement agencies and that the product will be eligible for procurement for one year.

The Epidemiology Unit recommended the procurement of Rapid Antigen Test Kits by the public sector on the 27th of October, he added, quoting the Director of Medical Supplies Division (MSD), “With the current level of the disease reported in Sri Lanka, the estimated quantity will be 250,000 tests per month. In this context, the requirement for the next three months along with the 2 months for the stock, would be 1.25 million tests. This forecast is based on the current status of the disease in the country.”

The Secretary to the Health Ministry, Dr. Sanjeewa Munasinghe had held discussions with the WHO on several occasions regarding the procurement of Rapid Antigen Test Kits for Sri Lanka, the state minister stated. “However, we were informed that it would take more than two weeks.”

Dr. Munasighe subsequently made arrangements to procure 200,000 tests kits through the WHO office in India, Prof. Jayasumana said adding that the Asian Development Bank also agreed to assist the procurement of 300,000 test kits.

“This is why the tendering process was commenced to procure the required test kits through the private sector.”

Accordingly, the Medical Supplies Division had informed the State Pharmaceuticals Corporation (SPC) of the emergency procurement and upon receiving the relevant instructions, tenders were called for the purchase of test kits and all members of Association of Pharmaceutical and Medical Facility Suppliers were informed about it, Pof. Jayasumana explained.

As the notice for procurement was published in the official website of the SPC, 29 companies had placed bids, he added. “The tendering process was opened on the 2nd of November at 2.30 pm.”

Taking into account the prevailing situation in the country, the government opted for emergency procurement as the usual procedure takes up several weeks, the state minister went on to explain.

After opening the tendering process, the bids are referred to the technical review committee, he said. “The committee’s evaluation is still underway.”

The government has not awarded the tender to any company as of yet, Prof. Jayasumana stressed, noting that the state sector has not purchased any Rapid Antigen Test Kits so far.

A fishing and hunting enthusiast took her hobby to the next level by catching a huge catfish with her bare hands.