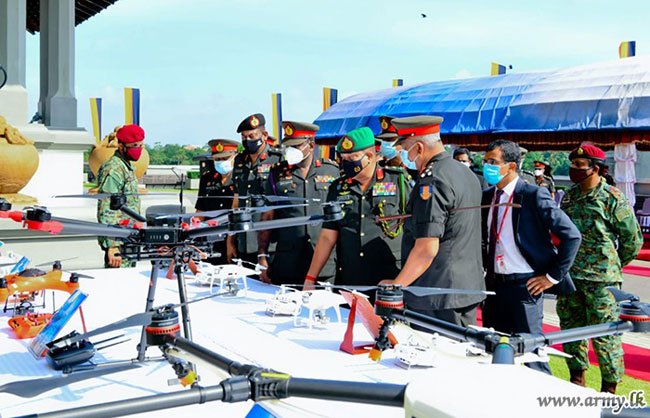 Being geared to preparing the Army for the fast changing technological advancements and new challenges, the Sri Lanka Army in another milestone turning point formally raised its newest wing, 15th Drone Regiment of the Sri Lanka Artillery (SLA) this morning (12).

The new regiment was inaugurated during a brief ceremony at the Army HQ, headed by Lieutenant General Shavendra Silva, Chief of Defence and Commander of the Army.

After the customary welcome note, delivered by Major General Sampath Kotuwegoda, Colonel Commandant of the Sri Lanka Artillery and Commander, Security Forces-Kilinochchi, in which he traced the brief legend behind the birth of the Artillery Regiment as well as how the new Drone Regiment came into being, the day’s inaugural ceremony reached its climax.

Next, the Army Chief symbolizing the formal raising of the 15th Drone Regiment handed over a new Drone to the Colonel Commandant of the Sri Lanka Artillery.

The keynote address of the day’s Chief Guest, Lieutenant General Shavendra Silva to the gathering afterwards highlighted the value and technical importance of a regiment of this nature in the Army, considering emerging soft operation trends in war scenario, natural and man-made disasters, floods and other catastrophes, special emergency circumstances, chemical warfare, outbreak of community-infected epidemics, like COVID-19 etc, for example.

He also thanked all involved in this effort as the Army’s ‘Way Forward Strategy’ should go hand in hand with those technical innovations which are in vogue throughtout the world.

A few minutes later, the day’s Chief Guest, together with Senior Officers closely watched a set of Drones of the new Regiment, kept on display in the premises and the Colonel Commandant invited the Army Commander to launch the first Drone on a reconaissance mission in the Army HQ complex area as all invitees looked on.

The new 15th Drone Regiment in the Sri Lanka Artillery is well-equipped with high-tech cameras that enable operations within short & medium distances and quadcopters with observation cameras for surveillance purposes in military or non-military applications, the SLA said.

The incumbent Commander of the Army, to be in consistent with the Army’s ‘Way Forward Strategy 2020-2025’ and preparing the Army for any technical challenges or threats wanted this exclusive wing be raised in order for it to engage in reconnaissance duties, gathering of  sensitive information, etc with a view to further strengthening national security needs and its concerns.